It was a call from one of my colleagues. Nothing for me to really worry about but on having attended the call, my brows remained raised for a few seconds, out of an alarming fact that I was asked to be a part of one of the Fashion Show teams participating in the Gladiator Season II Preliminaries!!! This was news out of nowhere. Gosh!! Fashion Show and ME…!! I remained perplexed for a bit. I couldn’t really be affirmative about this sudden bang, considering the fact that I had never walked the ramp and also sensed that I would be the only outsider (as in out of their technical team) there. To be more precise, I might not know anybody there and this was really not consoling enough. Though it would have been no big a deal otherwise, at that instant it seemed a problem king-size.

I felt a sudden shudder that outshone all the other occupants of my not so spacious brain. I got reminded of my work culture at office. Doing something out of the usual has always been the toughest! Who would know it better than me as I had been a major subject to it!! The very thought made me go weak at my knees. I was frantically waiting to get some space to fit in the golden word (pretty unusually golden though) ‘No’…For I knew I might not be able to do justice to the show along with my usual work.

Clear enough, ‘The Lady Luck’ had some other plans for me…The receiver was in the hands of Mr. Senthil, who was the man behind this Team (Fashion Show Team). When I heard him speak, I could just not find any room to blurt out the word ‘NO’ pacing across my mind…bright and bold, amidst all the other disturbances!! That was the effect those few words had on me. Well, not that I got a room from his side, either!

Ultimately, I was in! Not that I accepted it but never could I object. The practice had to start a couple of days before the prelims. Actual practice happened just a day before the show. I made sure I finished all my work for the day, along with the practice sessions. It was all manageable so I was safe!

I left for the practice…Gave a late entry so my first impression was not so good I guess. Well nevertheless, I had now made the entry with mixed feelings. Got a pretty warm greeting from all, which was indeed quite comforting for the state of mind I was in.  I was still a lil’ hesitant, a lil’ timid. However, I had become a member of the Team, be it a timorous one.  The practice was on and done in a couple of hours. 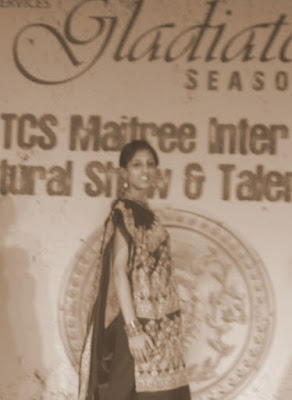 The next day, the 19th of Nov ‘09 was when we were to have our Pre-day with respect to the Fashion Show. I was again reminded by my fate that life is going to be no simple for me…My outlook opened and I clicked on my inbox to get the blow. It was quite an upsetting start, early that morning. I learnt I had hell lot of work for the day. However, I had to manage both. Not really left with any other choice, I took all the official permissions required for the practice and the event. I had to give my word that the work would get done “no matter what”. These were words real grave!! However, with a heavy heart, I then made a move for the final practice…

The contest was scheduled to be held at 12:30pm. We had decided to practice till about 11:00 am, get all ready and meet up at 12:00 noon to head towards the location. All was happening as per what was decided. No sooner did we reach the back stage, we learnt that the fashion show was postponed to 3:30pm, the same day. We were all, hungry and tired souls then! Hence, we decided to get done with our lunch and get together. We met up at about 1:30 and went up to the auditorium where the show was to happen.

Back stage seemed to be sort of free, which we planned to use up to catch up with tits and bits of practice. In the meanwhile, the stage was all set by the dancers. It looked like the participants were more in count than expected, thereby pulling on the show for longer than projected. This eventually meant our show would be delayed all the more. Even amidst all that noise and fun, my mind was turned off! I was slowly losing all the patience and the very sense of my work load was jetting some kind of a turmoil which made me crazily restless. I decided to leave and get done with some work till the show starts…Took Senthil’s permission and off I went.

I had understood what my work was like and what needed to be done. No sooner had I started my work, did I get a call from Senthil asking me to rush to the auditorium. Well, just locked my PC and ran like I would rather run to catch my office bus when really late. Alas! I reached exactly when it was our turn to walk the ramp. And yeah, not to forget, I had to start the show for our team. Ran through the crowd and stood in the front. I wondered if it could get messier!! :o

Senthil signaled and the music was turned on. There we were, finally walking the ramp!!

The spectators cheered big time!! Hope that meant they liked our Team ;) Anyway, I bid good bye to all my team mates and left the auditorium…Got back to work and worked till I finally finished it all and packed up to leave. It was 10:30pm! Good as I didn’t expect the work to get done this soon and horrific as I had worked continuously sitting in 1 place for more than 5 hours. Throat choked as it was totally desiccated by then. I managed having a glass of water and rushed to catch the office bus…Phew! I managed a seat as well.

A few days later, the results were declared and we were into the finals. It felt amazing! It was really worth the try we gave (and of course, worth the mess I was in).

Very soon, the date for the finale was out. It was on the 9th of Jan ’10. We had to come up with a plan with raised bars, bearing in mind the level of competition we would fall a part of. We made the plans 3 days prior to the show.

Costume, accessories and the props (as in properties) were something we had to be well equipped with. Our hunt for the same was on, in parallel with the Master Planning and those Crammed Practices. Master planning, so called as we had a great duo - The big brain (read Senthil) and the commendably experienced (read Sowmyajit), carving those plans diagrammatically on the decently huge white board. Those Crammed practices were an upshot of the round table conference room. All thanks to the over sized table and those super comfortable chairs that ate up all the space, forcing us to manage with the leftovers (meaning the leftover space) all around.  It was fun nevertheless!

We were all set to hit the destination which was a different office of TCS this time – The TCS office at Tidel Park. As usual, we gals reached the location way before the guys  but got ready way after them.  Finally, we girls got ready!! We met the rest of our gang and hit the final practice outside the auditorium. We were all carefree and high on confidence. All the props were ready too.  Here, I would like to mention something about one very creative soul. This would be Mr. Himanshu – The maker of those colorfully pretty daandiya sticks!  Those were used by us (meaning ‘The Gujju couple’) for like less than 5 seconds or so! Heavy efforts for a pretty light span, I must say…Wish I could have used them for longer though!!

We entered the jam-packed auditorium. We were awestruck looking at the heights of exuberance around! It was remarkable!!! The stage looked stunning, dawned with the gorgeous dancers. We caught sight of the guys having a complete blast. In no time, I could feel my legs tapping to the compositions. My body involuntarily jiggling to the rhythm and my mind going gaga over those songs at a blast! :D It was groovy to the core!!

The final display was that of the fashion makers…The most eagerly awaited show of the day – The Fashion Show! Teams were amazingly innovative in their ideas. The very first team proved this! The teams that followed were just getting better in every way. It was entertainment at its peak!! Three teams were done. They were all mind-blowing! But there was me, having a weird kind of feeling…Was it that I was worried or was I tensed?!! Or maybe just that the level of competition was way beyond what I had expected?!! Cheers to those teams that gave me this shudder! :(


We were the 5th to perform.  I had it clear by now, that we would be way too simple (read bland) in front of the other teams. My mind raced through, gathering all the possible modulations that we could make. But the ‘Boss’ (our very own Senthil) had his own take. He wanted us to keep it perfect…Be it simple!! No last minute alterations – No goof-ups! Such was his take and it actually, did make a lot of sense. My mind was all calm then…Like it was waiting for something. Was it waiting for the 4th team to get done??!!!! :0 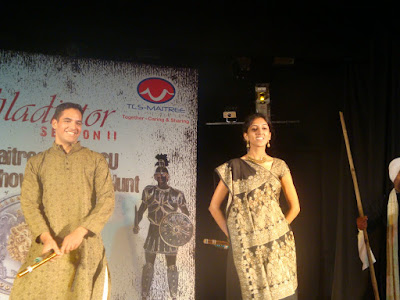 Soon our team was called to perform. We headed towards the back stage. Stepped onto the stage, placed the props and took our positions back stage. The music gave a pleasant start…It was ‘Vande Maataram’ by A.R.Rehman. Our walk on the ‘so called’ ‘so was’ ramp began. I could clearly see everybody in the crowd. Mind was absolutely blank now…All it knew was what needed to be done on the arena. Thank God for that!! :D  We had the Punjabis from the North, the Bengalis from the East, the Guajaratis from the West and the Tamilians from down South. Trying to depict the cultural diversity of India, here we were…! 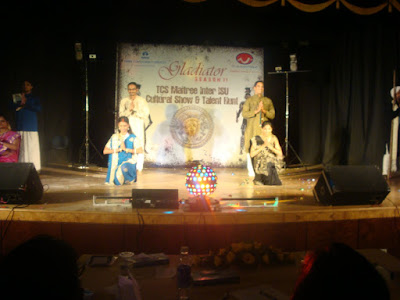 Even after all the odds, even though we didn’t manage coming out triumphant in the finale, there was something incredible about this entire journey; It was not just the fun element which I experienced in my otherwise not so happening life. It was something way beyond that…It was the strand of friendship that got woven with a few lovely souls, over this journey. Proud to have them in my kitty!!!

PS: I am so happy that I couldn’t say ‘NO’ when I was first asked to join in and complete this team. This word which I claimed to be ‘The Golden Word’ was actually something with mere glitter and no worth. This very thought leaves a SMILE so pure…:)))

Somebody has so rightly said:
“By persisting in your path, though you forfeit the little, you gain the great.”


The Book of pictures is right here. Click and check all the fashionable pages! ;)