It was a breezy noon inside our module!! Confused?!! Well, there was this breeze flowing across our team (DWRP), carrying along the news of the onsite funds having arrived at the offshore. This was news big enough for us. We were all pondering on what exactly this fund would be utilized for.

Soon this huge piece of melting ice berg…mind you, melting due to the increase in the rate of flow of mechanics in and around all our brains, resulting in an exothermic process…was broken!! We the AEP/HR initiative folks (read whatever you prefer :) ) of our team were called to have a discussion so as to infer the best way this fund could be utilized.

After all the possible discussions in and out of the frame, it was finally decided that we would have a day’s team outing on a non working day (preferably a Saturday). We had quite a few options which were all streamlined to just a couple, Tada Falls in AP or 1 of the theme parks in Chennai. Tada was the call of time and we the people!!

The decision was made. It would be a trip to TADA Falls...Our team trip to TADA Falls. :) The sponsored trip to TADA Falls was scheduled to happen on the 10th of Oct ’09 (Sat). After all the thought processes and the home works done, there was the onset of all the arrangements. In the course of all the preparations, we were tremendously motivated by the excitement and the response most of the folks had in store. We were all the more pepped up looking at all happy faces around. Everybody seemed to be desperately waiting for a break like this…!

Finally it was THE Day we were all eagerly waiting for, the 10th of Oct!! The buses were all ready to mark the start of the journey. We flagged off the drive from 2 different places. The journey saw a slow start in gathering people on the way. However, this soon learnt a gradual gain in momentum. We had 2 buses taking care of the two different routes, trying to cover Chennai in the best way possible.
With more and more folks boarding into the bus, the energy inside seemed to take an amazingly positive ramp (a complete ramp-up, to keep it simple :) ).

We were all engrossed in the fun journey to the destination much awaited! Soon both the buses got in synch with each other and made a halt. Everybody got down and flocked with utmost joy. Every possible person seemed to be comfortably out of their shelled cocoons!! :) The breakfast was distributed and the journey recommenced.

We were now in the Tada premises. It was a village named Tada, in Andhra Pradesh (to be ‘not so precise’, it is located in the Northern TN and Southern AP), to start with. The view was of hills far away and raw land all around. Not much of greenery on the way and the sun was at its best! The path kept getting narrower and to top that, it was now really bumpy. This made it tough for the bus to move swift but nevertheless, we soon reached a flat terrain full of red sand. It was time for us to get down to start our trek (read to prove our existence there! ;))

The lunch bags and water bottles were distributed and each one of us was all set, with the mini baggage, to be carried along. The trek hit a start with an absolute bang!! We were all elated and totally energetic though we had already started perspiring big time. We knew our walk wouldn’t be easy and to add on Lord Surya gave the path the golden topping. This was something we really didn’t wish for, at that point of time. :( It so totally added on to the toughness. Nevertheless, we were all set to face the music!! We were a huge chunk, about 50 odd folks consisting of quite a few first time trekkers!


We passed the flat terrain which was pretty open to let the sun rays embrace each one of us. The colors my eyes could see were minimal. Barren land full of heavily pebbled red sand. 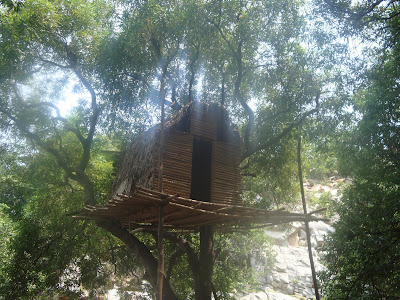 We then came to a highland. It was a very narrow passage engraved through the huge bushes and trees. Now, my eyes were totally pleased with the greenery around. We then came across an overpass carving the miniature pond underneath. Our eyes were then caught by a pretty little tree house built on one of the trees. It was a petite one, yet really beautiful!!

It was now a land of small rocks. Land that was uniformly bumpy! :) These rocks were not big and looked like it would be a very easy way across. I so totally felt so. However, we soon realized how erroneous we were. The path was horribly slippery. We were not only climbing the way up but were also witnessing something phenomenal. “TEAM SPIRIT”- Yup that was what we got to witness…Team Spirit at its peak!!! It was getting tougher and tougher for the first timers to climb their way up. And it was this toughness which was so well abated with the right kind of help from all the possible folks.

With pillars of strength like these around, even those who were struggling, actually fell in love with the feel of trekking. With every level we crossed, the path became more harsh and the journey more strenuous. But there was - ‘this feel of achievement’ which was well rooted deep within every soul! This was what we felt when we were in the 5th level. 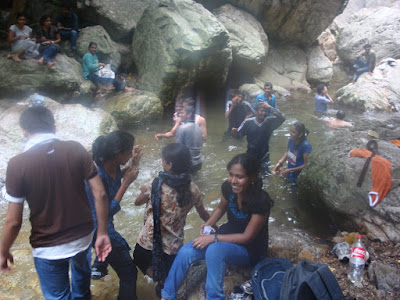 The 5th level was complete fun!!! There was a pond of clean water. It was not just clean but amazingly cold as well. :) Something which came in as an icing to a tough cake!!! In simple words, it was something we really needed to refuel our engines. Day was getting hotter and hotter. We just couldn’t wait to feel the natural chillness. Luckily, the water body was pretty shallow. Everything right falling at the right place!! :) The minute we plunged into water, we had an instantaneous current of energy that ran across our veins. We were all charged up!!

It seemed never-ending. We played in water like kids, enjoying every moment. The fun was to such an extent that empty stomachs seemed making no noise (or no brain possibly realized the noise ;))!! It was time we fed our tummies. We took turns and had our lunch. The tamarind rice we ate seemed an elixir of my life then!! We really wished to trek it up to the falls. Sad though, we had to stop the journey there, as quite a few had sprains and it was clear that the journey up would be extremely arduous. We had to work it out keeping the entire team in mind (mind you, we were 50 odd folks!!).

Having got all charged up, it was time we trekked our way back. It was getting late so we got a little paranoid if we would be able to make it as per our plan. However, the path back turned out to be a lot simpler than expected!! Walking down was a cake walk after having walked up the tedious. :) Since the walk was simple, we made the most out of it…Had complete fun, fun all the way. :)

Finally, we reached the flat terrain in a completely different route. Crossed bigger water bodies this time! It was simply fulfilling!!! In fact, even when we felt the pain we were subject to, it lit a beam across our faces with some kind of a sense of achievement!! Every bit of the experience is tough to express…I have tried to pen down the little possible.

We were there dawn to dusk,


Enjoyed every grain, with the gains of husk!!


Amazing was this experience of mine to TADA!!! I am sure everyone who was a part, would feel the very same.

“In every walk with nature one receives far more than he seeks!!”